Highlights from the January Board Meeting 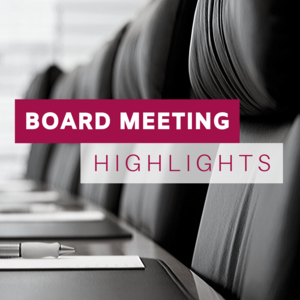 Difference between French Immersion and Extended French at the secondary level:

The Board gave formal approval for the following actions of the Director of Education:

New Superintendent of Business and Treasurer

Debbie Jordan, currently the Executive Manager of Finance and Purchasing, has been appointed as Superintendent of Business and Treasurer effective February 3, 2020, subject to confirmation by the Minister of Education of eligibility for appointment to the position.

The Trustees approved the nomination of Jacob Morrisey (STA) for the position of Student Trustee for 2020-21. The LDCSB believes that the interests of students can best be promoted through student representation on the Board of Trustees. The Board also believes that all trustees will benefit from having a student voice on educational issues and that a student trustee through involvement with the Board will gain valuable experience in the democratic process and a deeper understanding of the purpose and mission of Catholic Education.

In November, LDCSB Board Indigenous cultural teacher, Adam Sturgeon, received the Atlohsa Peace Award for honesty. The Award honours those "who have made a social, cultural or educational contribution to the spirit of truth and reconciliation. Honourees represent the Seven Sacred Teachings of wisdom, love, respect, bravery, honesty, humility and truth." Adam received the award for his work with our board and for his work in the community.

Directors of Education are required to report annually on the activities and progress of the system for the previous school year based on the Board's Multi-Year Strategic Plan.